Dear Visitor of our site,
We have moved our blog about immigration detention centres to our main Prison Watch Network site. You can find the blogposts here. Thank you.

Email ThisBlogThis!Share to TwitterShare to FacebookShare to Pinterest
Labels: 2015

A story from the site of AP

TACOMA, Wash. (AP) — Immigrant-rights activists rallied outside the Northwest Detention Center on Saturday, while at least 750 detainees protested their treatment and called for an end to deportations with a hunger strike.

The U.S. Immigration and Customs Enforcement department said on Saturday morning that 750 detainees had refused to eat and said they were on a hunger strike.

"We are concerned for their welfare, and we support their brave stand against inhumane treatment. We are gravely concerned about retaliation, particularly against the hunger-strike leaders," Villalpando said.

Immigrant Stories: The nurse, the detention centre & the women with bruises

An occasional series of Immigrant Stories, shining a light on the people trapped in Britain's immigration system.

"I was working in a local hospital when I saw these women come in with handcuffs on," Susan says.

Susan is not her real name. She talks on condition of anonymity.

"I asked about it. It was clear they'd committed no crime.

"They'd been hunger striking in the corridors of the nearby detention centre. They were grabbed by the guards.

"The nursing notes said they had no injuries and were fine. When I saw them they clearly had wrist bruises which they sustained in Yarl's Wood. There were bruises on their backs as well. They were very distressed."

Susan's experience left her disturbed. Why were women who had committed no crime arriving in handcuffs, bruised, under detention?

A little while later she read a newspaper report about Yarl's Wood. Security personnel were guarding the perimeter fence against a reverend dressed as Santa trying to give gifts to the children locked up inside.

Palpable desperation: Inside the invisible world of immigration detention

The reports of sexual abuse at the Yarl's Wood detention centre were sadly not much of a surprise to people who work with immigration detainees.

Recent reports of sexual abuse at Yarl’s Wood shine a small spotlight on the otherwise invisible world of immigration detention. They detail how guards preyed on isolated women, subjecting them to unwanted advances, using their positions of power to coerce them into sexual acts. Shocking yes. But sadly not much of a surprise to people who work with immigration detainees.

As a trustee of a small charity, Bail for Immigration Detainees, I visited Yarl’s Wood late last year. The desperation was palpable. One of the women I met had heavily bandaged wrists. She was on 24-hour suicide watch after one failed attempt to take her own life. She, like others I spoke to, was desperate to get out of what is little more than a prison. With 30,000 people detained per year, these women are far from rare.

Many people in detention - both men and women - are incredibly vulnerable. They are often fleeing violence and persecution. About half have claimed asylum. Some have been the victims of torture and rape.  To have faced and survived such trauma, to have undertaken a difficult journey to get away, to have left behind loved ones and the world that you know, to then reach supposed safety only to be locked up is a cruel irony. And to be detained with no release date and no time-limit must be utterly hopeless.


It is little surprise that detention is incredibly damaging. Self-harm and detention go hand in hand, with studies suggesting there are higher levels of suicide and self-harm amongst detained immigrants than amongst the prison population. The impacts on physical and mental ill health are well-documented - severe distress and depression as a result of detention are common.

People inside immigrant detention centers in The Netherlands (Rotterdam / Schiphol - Amsterdam) are on a hunger strike. Now several are also refusing to drink. We need to show support and make politicians act now!

From: Getting the Voice Out / Deportatieverzet:

Public indictment against the system of repression we call Fortress Europe

About 60 asylum seekers in detention center in Rotterdam, the Netherlands, have been in hunger strike for four days now. 18 of them also stopped drinking since Wednesday 8th of May. They are protesting against the asylum policy that criminalizes refugees: they get thrown out on the streets without money or shelter and they get detained in prisons for up to 18 months. The refugees on hunger strike demand not to be treated as criminals anymore. They clearly statedthey want freedom and protection.

The Dutch government has shown an unbelievable arrogance in this matter.

At first, they did not respond to the demands of the refugees at all. One parliament member of the ruling party People’s Party of Freedom and Democracy (VVD) even went as far as to say the refugees “were taking the government hostage” by going on hunger strike. Then, as late as Thursday 9th May, they “provided” a worthless “offer”. In return for the end of the hunger strike, the government “offered” to shorten the usual 17 hours a day detainees are locked inside their cell with a few hours.

The hunger and thirst strikers of course rejected this ridiculous proposal and they will continue with their protest.

But things are getting very serious right now. As of Friday the third day without water begins for the refugees who have no other means of getting their voice out than to go on a hunger or thirst strike.

Refugees searching for a better life get thrown into a Kafkaesk bureaucracy of having to provide proof that doesn’t exist in order to get their permit to stay. Once rejected, undocumented refugees get thrown out on the streets and get denied basic human rights, such as food, shelter, work and health care. Racist police hunt them down and jail them. In detention, refugees are stripped from their dignity, their autonomy, their lives and their future. Once deported, no one ever hears from them again.

Right now, refugees in detention center Rotterdam are directly and unmistakeably demanding their rights and their freedom.
The government will have to respond very quickly and adequately, if they don’t want to be held responsible for dozens of deaths.

We are strongly calling for solidarity from our friends throughout Europe. Solidarity with the hunger and thirst strikers in special; and with refugees in general. The state is aimed at excluding everyone who is not directly exploitable by capital. Make it known how this insane migration policy of repression destroys the lives of hundreds of thousands of refugees.
Show your solidarity by spreading this message.

TOGETHER WE CAN FIGHT FORTRESS EUROPE!

We received this from an active group called CIVIC (Community Initiatives for Visiting Immigrants in Confinement), which is the national immigration detention visitation network in the USA.

Visitation, visiting people inside immigrant detention centers, enhances their psychological wellbeing as well as their human need for companionship from outside, and it is also necessary to prevent human righs abuses from taking place or from being easily inflicted.

When people from the outside visit, those inside feel a little safer, knowing that those on the outside know their situation. And they get a break from being forced to be locked up for an uncertain amount of time. Visiting is very important, powerful, and very much needed. Here is what CIVIC wrote:

Everyday immigrants disappear and are detained by the U.S. government.

For example, Ana is a human trafficking victim who was detained for over a year, locked in solitary confinement, and forced by a guard to sleep on the cement floor of her cell until Community Initiatives for Visiting Immigrants in Confinement (CIVIC) ended this isolation and abuse.

Over 32,000 immigrants like Ana remain isolated in these remote detention facilities today because no
law protects a right to visitation, phone calls can cost up to $5.00 per minute, and 46% of detained migrants are transferred at least twice--often out of state and away from their families.

CIVIC is setting in motion a national movement to combat the isolating experience of immigration detention. To get involved or for more information, please visit their website at www.endisolation.org.

Also please visit this blog with a lot of information about immigration detention, made to make people aware of immigrant detention and visiting people inside these prisons: Detentiondialogues.blogspot.com

The Visitation Manual/Directive can be found here (PDF). 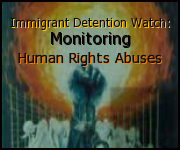 Community resource for monitoring the treatment of immigrating people, refugees held in detention centres; in solidarity with migrants everywhere

Invisible in Isolation: The Use of Segregation and Solitary Confinement in Immigrant Detention 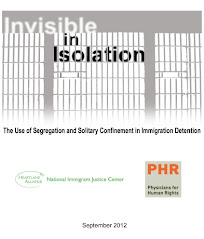 Report by the National Immigrant Justice Center and Physicians for Human Rights (Sept. 2012)

To report an abuse by a USA Border Patrol, Customs, or ICE officer, please call the Immigration Law Enforcement Monitoring Project at (713) 926-2799, or email ilemp@hotmail.com

Locked Up Far Away: The Transfer of Immigrants to Remote Detention Centers in the United States 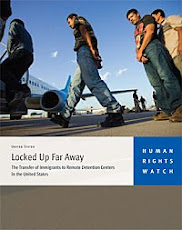 The Torture Report, an initiative of the ACLU's National Security Project, aims to give the full account of the Bush administration's torture program, from its improvised origins to the systematized, lawyer-rationalized maltreatment of hundreds of prisoners in U.S. custody around the world. Congress has yet to initiate a full, serious investigation of prisoner abuse and other detention violations. There is little political will to press for accountability and little likelihood that any official reviews now underway will produce the kind of authoritative public record that is needed... 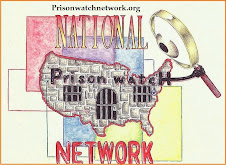 Links of Support Groups and Media

For visiting those inside immigrant detention centers in the USA

"The encampment" in Europe and around the Mediterranean Sea

Migreurop, based in Paris, is an Euro African network of 43 organizations and 30 individual members (activists and researchers) within 13 countries of Africa Europe and Lebanon.

We work especially against detention of migrants in Europe and beyond and also on the concept of externalization (borders controls, Frontex, deportation, readmission agreements…etc.)
CALL FOR THE CLOSURE OF CAMPS FOR MIGRANTS, IN EUROPE AND BEYOND (2010)
MigrEurop has published this map of detention camps in Europe (2009).

"Indeed we published an atlas a year ago with around 100 maps and articles on our critical point of view of the EU policies concerning detention and deportation."

Report on immigration in the United States: Detention and Due Process (2010-2011)